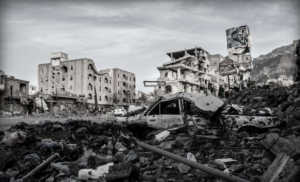 We, the undersigned more than 75 international, regional and Yemeni CSOs, call for the United Nations Human Rights Council (HRC) to extend and broaden the mandate of the Group of Eminent Experts on Yemen (GEE), including a thorough investigation into specific violations against human rights defenders, journalists and bloggers, and the closure of civic space.

The mandate of the GEE, which was created in September 2017 and extended for one year in September 2018, is up for renewal at the 42nd session of the UN HRC in September 2019. The UN High Commissioner will present the GEE’s report at the HRC followed by an interactive dialogue. The GEE’s mandate is to “monitor and report on the situation on Human Rights in Yemen” through “a comprehensive examination of all alleged violations and abuses of international human rights…. committed by all parties to the conflict since September 2014, including possible gender dimensions of such violations,” to “identify those responsible” and to provide “guidance on access to justice, accountability, reconciliation and healing.”

The humanitarian disaster caused by the war in Yemen has been well-reported. Among the many victims are human rights defenders, journalists, bloggers and activists. We encourage the GEE to ensure that upcoming reports increase the focus on the ongoing attacks by all the parties to the conflict specifically perpetrated against human rights defenders, journalists, bloggers and Internet activists. The closure of civic space makes it difficult for civil society organisations (CSOs) to operate, including through restrictions on freedom of expression and assembly, such as travel restrictions on human rights defenders which prevent them from engaging with the UN and the international community at large.

We are deeply concerned about the repeated and persistent closures of the Internet throughout Yemen as well as the targeting of Internet activists by various parties, which has resulted in an Internet blackout. We hope that the upcoming report of the GEE will address all these important issues that directly affect freedom of expression on the Internet.

We are highly appreciative of the important and necessary work of the GEE, which has thoroughly detailed the disturbing human rights crisis in the country. We further support calls to build on this important work and upgrade the GEE into a Commission of Inquiry explicitly mandated to conduct investigations into violations of international humanitarian and human rights law, collect and preserve evidence of such violations, and identify the perpetrators with a view to ensuring that those responsible are held accountable. This would be consistent with the mandate of the GEE.

The mechanism should report directly to the HRC and function independently from its member states. It should also have a multi-year mandate with a view to strengthening accountability and countering impunity for human rights violations.

When releasing its first report in August 2018, the GEE stated that: “The Experts also have reasonable grounds to believe that, since September 2014, parties to the conflict in Yemen have severely restricted the right to freedom of expression. Human rights defenders and journalists have faced relentless harassment, threats and smear campaigns by the Government of Yemen, coalition forces, including those of Saudi Arabia and the United Arab Emirates, and by the de facto authorities in blatant disregard of human rights law.”

The 40-page report includes sections on “Arbitrary detentions, enforced disappearances, torture and ill-treatment” and “Violations of freedom of expression”, in which human rights defenders are mentioned several times. We welcome the references to human rights defenders, activists and journalists who have been attacked and/or are arbitrarily detained in Yemen. We note the particular references to those who   have faced threats and relentless harassment or been repressed on the basis of gender. We encourage further attention to the details of the repression they have faced, including building on the GEE’s documentation of 20 cases of women human rights defenders, journalists and activists who “have faced specific repression on the basis of gender” from all sides.

We look forward to seeing the GEE’s next report, and express full appreciation of the dedication and hard work of its members. We sincerely hope that the GEE’s mandate will be extended and strengthened into a multi-year Commission of Inquiry, including a specific focus on threats to human rights defenders, journalists, and bloggers, and the closure of civic space.